Who doesn’t love a duck? In the Señorita Vino household, ducks are universal symbols of all that is right in the world. Rubber duckies brighten our bathrooms–and offices–with their cheery yellow livery, and in the years since we’ve been married, Señor J and I have amassed quite a collection of duckie Christmas tree ornaments.

Imagine my joy last week when I learned that a rubber duckie as tall as a six-story building would lead a flotilla of tall ships into the Port of Los Angeles. Turns out all of LA was jonesin’ for cuteness. Nearly  300,000 Angelenos made the trek to the San Pedro waterfront to catch a glimpse of the gargantuan bath toy. And because we’re Angelenos, traffic was backed up for miles on Sunday, which was supposed to be the duckie’s last day in L.A.

Thankfully, the Los Angeles City Council came down with a serious case of Rubber Duckie Attachment Syndrome and decided to let the little fella stay on through Sept. 6, which includes today, International Duck Day.

In celebration, here’s a roundup of wines named for ducks.

1. Duckhorn – This Napa Valley wine is named for the owners, who have spun off other labels including “Decoy.”

2. Luis Pato – Pato means duck in Spanish, but this wine is from Portugal. And it’s the winemaker’s last name. So it’s technically not named after a duck, but he put a duck on the label, so there you go.

4. Baby Duck – It seems this Canadian sparkling wine is no longer in production. It’s a shame, because I can’t think of a better bottle of bubbly than this to christen the tall ships  in the flotilla led by the ginormous rubber duckie last week.

5. Duck Commander – Okay, would you buy wine from these vatos locos?

Exactly. But that didn’t stop them from making Duck Commander. It should, however, stop you from smearing GI Joe paint all over your face and getting your own reality series.

6. Lucky Duck Wine – Amazing things happen when you do a search for wines named after ducks. It turns out Walmart sells this wine with a most fortuitous moniker, which comes in five different varietals, including Malbec. Now say this in your best Donald Duck voice: Who knew? 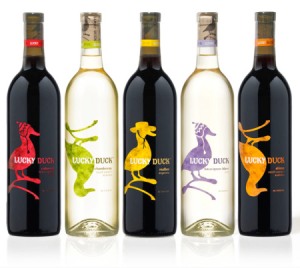 So there you have it, chicas y chicos. Aren’t you glad to know winemakers all over the world share an appreciation for our adorable little feathered friends? And aren’t you also glad that there’s a rubber duckie for every occasion, including Fraternity Rush Week at your local college campus?

10 thoughts on “In honor of #InternationalDuckDay, #wines with ‘duck’ in the name”