Darlings, it’s been a crazy week, so I’m sharing an oldie but a goodie. Here’s a post on LA’s only Latino-owned winery. Now you know that you really can go wine tasting in L.A. ¡Salud!

About an hour’s drive north of downtown Los Angeles, the radio signal in my car begins to fade. Minutes later as I exit the 5 freeway at Agua Dulce Canyon Road, a country western station pipes in crystal clear.

The twangy guitar and folksy melody provide a fitting soundtrack for the winding country roads that lead to Reyes Winery, the only Latino-owned winery in Los Angeles County, and one of a few wineries 45 minutes away from the heart of downtown L.A. 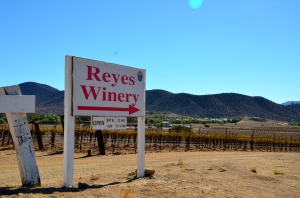 Robert Reyes, winemaker and general manager, warmly welcomes me and a crew from ABC-7, who are here to do a segment on Señorita Vino for their Sunday morning television program, Vista LA [NOTE: the show aired Nov. 17, but if you’re in L.A. County, you might catch a re-broadcast in the late evening or early morning]. 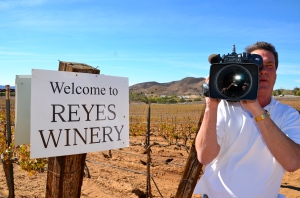 Besides making wine, Reyes, a native of the Dominican Republic, paints and scuba dives. Yet this Renaissance man’s passion for wine stems not from idyllic trips to Europe’s wine regions, but from a beloved aunt.

“I’ve loved wine since I was a kid in the Dominican Republic,” Reyes says. “My 92-year-old aunt would visit us in Santo Domingo and she’d bring a bottle of her homemade fruit wine. As kids, we’d get a taste.”

Reyes was smitten, and as an adult, he started making his own version of his aunt’s fruity concoction. 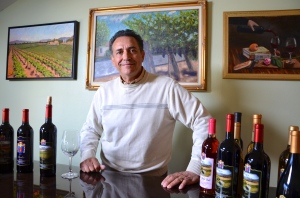 What started as a passion developed into a serious interest, and Reyes began schooling himself in the art of winemaking by reading books. He also consulted other winemakers and took courses at UC Davis, which has a world-renowned viticulture and enology program.

He planted the first vineyard at Reyes Winery in 2004, and harvested a small crop the next year. Today, the boutique winery produces 3,500 cases annually from five varietals: Cabernet Sauvignon, Merlot, Syrah, Chardonnay and Muscat.

On display in the tasting room are Reyes’ own paintings of the vineyard and scenes evocative of his homeland. Also visible are some of the awards his wines have garnered. 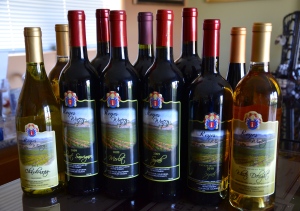 “Our wines have been on the market for the past two-and-a-half years, and in that time we’ve earned medals in every competition we’ve entered,” Reyes notes. To date, the winery has won 29 medals.

Despite the honors, Reyes remains grounded. And he’s quick to dismiss wine snobbery. “There are a lot of people out there who, for whatever reason, have this attitude about wine knowledge,” he says. “If you taste a wine and like it, then it doesn’t matter what anyone else says about it.”

When asked about wine consumption among Latinos, Reyes observes that Hispanics are definitely upping their wine drinking. He attributes the increase to the fact that Latinos are becoming more affluent as they integrate into American culture.

“Where we once worked in the fields, we now have the means to be able to make wine and especially drink wine,” states Reyes. “It’s a social phenomenon that we’re all participating in.”