Wanna learn about France’s fabled Bordeaux region? How about over lunch at the Peninsula Beverly Hills with 32 of  Bordeaux’s most prestigious  winemakers? If  “anxiety attack” was the first thing that came to mind, fabulous! I’m not alone.

Moments after I RSVPd for a sit-down trade luncheon featuring Le Cercle Rive Droite, a French society that represents 143 vineyards from the Right Bank of Bordeaux (more on that later),  my top three wine tasting insecurities materialized: How early would I dribble red wine all over my chin while using the spit bucket? Would I be able to keep up with the wine lingo? And would I drown in a sea of old guys wearing tweed jackets and silk cravats?

Chicas y chicos, yesterday’s luncheon offered more proof that wine anxiety is très passé, and I managed not to get a single drop of wine on myself (wish I could say the same for my notebook).

Best of all, I was happily swimming in a sea of  hip, young winemakers, some of whom were women, and one of whom encouraged me to unleash my très broken français on her. We chatted about weddings, food and her childhood growing up in a chateau. C’est cool! 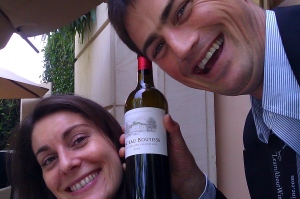 Before I describe some of the highlights of the lunch, here are six things you should know about Bordeaux:

Because Le Cerlcle Rive Droite represents winemakers from the Right Bank (rive droite, pronounced reev dwat, is français for right bank), the wines served  at the lunch were a blend of 70 percent or more Merlot with some Cabernet Franc, Cabernet Sauvignon or other approved grapes. So if you dig Merlot, chances are you’ll enjoy a Right Bank Bordeaux.

Merlot is not as tannic as Cabernet Sauvignon, so it pairs well with chicken. No surprise, lunch was a chicken breast with mascarpone polenta, tomatoes, sweet corn and chicken jus. Délicieux!

Merlot also pairs well with cheese. Perfect, since dessert featured a cheese plate and an assortment of cookies and macarons. Apologies to you sweets lovers–I bypassed the cookies and went straight for the cheese. 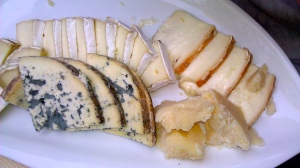 Careful readers are probably wondering about the old guys in tweed jackets. I saw none.  In fact, a jacket-less French winemaker at my table reported that the only jacket he brought “was an alcoholic.” Egged on by his peers, he described how a bottle of wine had broken in his suitcase, thereby giving his jacket “plenty of time between New York and Los Angeles to drink the entire bottle.” And that, mes amis, is living proof that Bordeaux wine–and winemakers–are nothing to fear. Santé!