“Where love is concerned, too much is not even enough.”

In my world, too much Valentine’s Day is not enough. Maybe I’m a sucker for love, or maybe I’m just looking for an excuse to eat chocolate all day long. Regardless, I thought I’d spread the amor by sharing my experience providing wine pairings for a pre-Valentine’s fiesta this past Sunday.  The passionate affair between Latin American foods and the wines that adore them is like a sweeping romantic drama I never get sick of watching. So dim the lights, grab a box of bonbons, and find out what happens when a spicy dish meets a suave Latin American.

It all started with those randy Spanish conquistadores, who had the insight to bring the grapevine to the Americas. The Spaniards had a winemaking tradition dating back to the Roman Empire, circa 210 B.C. Fast forward to modern times, circa four days ago. A macho Spanish Rioja falls in lust with a picante Latin version of an American classic: beef sliders with potatoes in a creamy jalapeño cilantro sauce. The result is nothing short of explosive.

So this saucy Peruvian dish walks into a bar and collides with a crisp Uruguayan. Her name: Tallarín Verde. Chicas y chicos, this is the stuff telenovelas are made of. In case you’re wondering, the Uruguayan is none other than a 2010 Pisano Torrontes Rio de los Pájaros from Progreso, Uruguay. The reason these two are such a good match: The crisp acidity of the wine harmonizes with the rich, cheesy sauce of tallarín verde, or ‘green spaghetti.’ This classic Peruvian pasta dish features a creamy basil sauce that’s heavy on the garlic and cheese. Two words: Qué sexy.

Scene 2: It takes two to tango

The plot thickens: Red wine and chocolate become Latin lovers in the form of chicken mole tacos and an Argentine Malbec. Call them Latin America’s sweethearts. The reason they work well is that the spice of the mole sauce matches the spicy notes in the Malbec. Tango Trivia Time: The smoldering dance was born in the poorer neighborhoods of Buenos Aires. Fittingly, you don’t have to marry a millionaire to be able to afford this 2008 Flichman Malbec Tupungato, a steal at $15.99.

How could anyone not fall in love with Brachetto, a salmon-pink, sweet Italian sparkling wine? Rumor has it that this was the beverage of choice among Italian high school students back in the 80s, which makes my own youthful dalliances with strawberry daiquiris sound muy cheesy by comparison. Brachetto is a hit at all the pairings Señorita Vino has recently created, so hurry on over to your local wine shop for a bottle of Sant Orsola Brachetto d’Acqui. That’s amore! 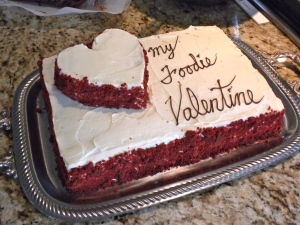 Stay for the Credits:

All of the wines featured in this post were purchased by Señorita Vino at Total Wine and Spirits in Redondo Beach, Calif. Total Wine is a national retailer with an extensive selection of wines from all over the world. Look them up online to find the nearest location.

The delectable dishes mentioned were the creative genius of Art Rodriguez, who with his partner Stephen Chavez are co-founders of LatinoFoodie.com. They graciously invited Señorita Vino to select wines for the food tasting menu at their first-ever My Foodie Valentine party. ¡Besos, muchachos!

20 thoughts on “Love story–wines and foods of Latin America”