In honor of my lovely Canadian cousin’s visit to Southern California this week, I’ve reached into the Señorita Vino Vault and plucked this post from a few years back when I attended the Wine Bloggers’ Conference in British Columbia.

That’s right, chicas y chicos, Canada is not just about hockey, Mounties and maple leaves. And for those of you who know a bit about wine, there’s more to Canadian winemaking than Icewine. 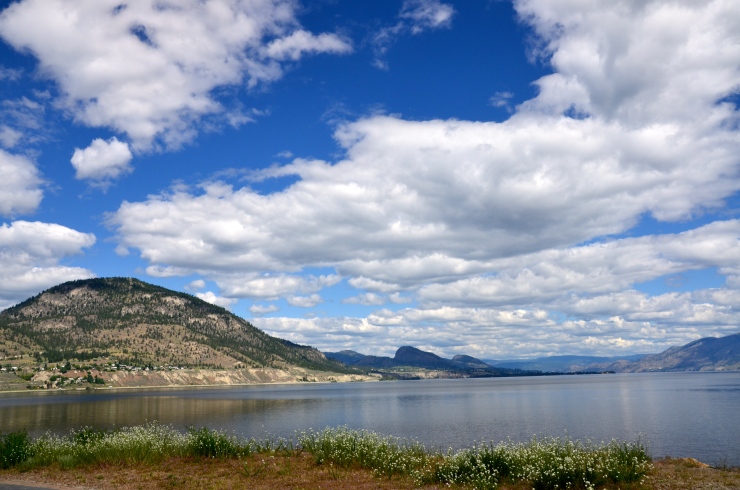 The Okanagan Valley DVA is about a three-hour car drive east of Vancouver, and it’s where I stayed during Wine Bloggers Conference 2013. Which brings me to El Full Disclosure: I received lots of free wine tastings at the conference. But no one is paying me to write this post. And the opinions you’ll read below are mine, all mine!

And speaking of opinions, Sandra Oldfield, president, CEO and winemaker at Tinhorn Creek, has one cool ride:

Located in the Oliver Osoyoos sub-region of Lake Okanagan, Tinhorn Creek winery was established in 1993 by Sandra and her husband, Kenn. They met cute in the UC Davis enology program, and after they’d been dating for a while, Kenn took Sandra to a romantic place one evening to pop the question. But to Sandra’s chagrin, the question he popped was, “Sandra, would you be my winemaker?” Sandra’s disappointment lasted all of 24 hours, since Kenn wised up and asked her to marry him the next day.

Tinhorn has a restaurant onsite called Miradoro, where I and about 40 other wine bloggers were treated to a Spanish-themed dinner paired with a broad array of Oliver Osoyoos wines.

Tinhorn’s vineyards are situated on two totally different plots of land. One gets plenty of morning light, making it ideal for Gewurztraminer and Pinot Gris. The other parcel takes in afternoon sunlight and heat, which provides optimal conditions for Cabernet Franc and Merlot.

Although there was nary a Mountie in sight that evening, I did have a run-in with a vino-totin’ sheriff. He hailed from Rustico Farm & Cellars, where they produce Farmer’s Daughter Gewürztraminer, Mother Lode Merlot, Saloon Sally’s Cabernet Franc Rose, and, of course, Bonanza Old Vine Zinfandel.

And the gods were smiling upon me, because the sheriff issued not a citation but a badge, making Señorita Vino an official member of the Rustico Wine Posse. ¡Salud!

NOTE: Some Canadian wines are tough to find stateside, so if you can’t join their wine clubs, make it a vacation and go to the source!