It’s the third Thursday in November, and that can only mean one thing: time to get your Beaujolais on, chicas y chicos! Today is Beaujolais Nouveau Day, so here is the 411 on Beaujolais  before you hit the store. This post is an updated version of what I like to call an oldie but a goodie. Enjoy!

These days, Beaujolais Nouveau is everywhere but in my glass. It’s 5 p.m. and I’m dashing to get this post up before you head to the grocery store to buy your celebratory bottle of Beau’. 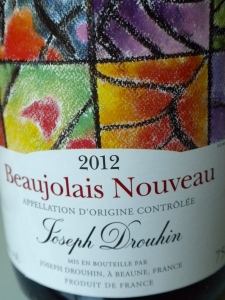 You’ve probably noticed a surge of advertising space dedicated to the arrival of France’s Beaujolais Nouveau. Much like a visit from a favorite tía or cousin, the landing of this colorfully packaged wine on our shores is heralded with fanfare and buzz. Tens of thousands of dollars go into marketing campaigns and fancy grocery store displays. Why all the fuss? One word: Timing.

Unlike most wines, Beaujolais Nouveau is ready to drink almost immediately after fermentation. You may recall that fermentation is the process by which the sugar in the grape juice is gobbled up by hungry yeast organisms, resulting in…alcohol! Without fermentation, all we’d have is grape juice. A huge volume of Beaujolais is bottled weeks after fermentation, exported from France et voilà, on grocery store shelves starting, like clockwork, the third Thursday in November.

Before we go any further, I should note that red Beaujolais Nouveau is the wine that triggers all the excitement this time of year. Beaujolais (sans the Nouveau) is a red or white wine, also from the Beaujolais region of France, that you can find year-round.

Red Beaujolais wines are generally made from the Gamay grape using a technique called carbonic maceration. All you need to know about carbonic maceration for now is that it gives wine a tropical fruit aroma, which can be a blessing or a curse.

For a while, Beaujolais got a bad rap from the wine community. It was considered too fruity, too thin, too mass-produced, too unsophisticated, and on and on…In fact, some folks still feel that way.

One of the great things about Beaujolais, however, is that you can serve it with various kinds of food, especially at Thanksgiving. Since the wine is not aged in wood, there are barely any tannins to overpower your turkey (the lack of tannins, by the way, is one reason the wine won’t age well). Also, the alcohol content is light to moderate, so the wine pairs well with spicier foods (hello, Thanksgiving tamales!).

And for you budding Julia Childs and Jacques Pepins out there, you can cook with it. Use it to make anything from poached pears to chicken wings. Talk about versatility! I’ll leave you with this thought–now that you know what Beaujolais Day is, why not make it an annual tradition? Gather your friends and some bite-sized tamalitos, serve ’em up with a bottle of Beaujolais Nouveau and start the holiday season right. It beats the heck out of standing in line at the mall at 4 a.m. on Black Friday. ¡Salud!